Check out the Kaufman Kids' new YouTube channel!
You are here: Home / Inspiration / Disneyland without Walt: A look at the triumphs and tragedies of 1966 | #60Daysto60Years
47shares

I have the super fun privilege of joining with 59 other bloggers as we count down to Disneyland’s 60th Anniversary! My friend Didi from DisTherapy and Gayle from Disney Gals (plus a few dozen other bloggers!) have done a similar countdown for other major anniversaries. When I saw the call for #60Daysto60Years, I knew I had to join them! 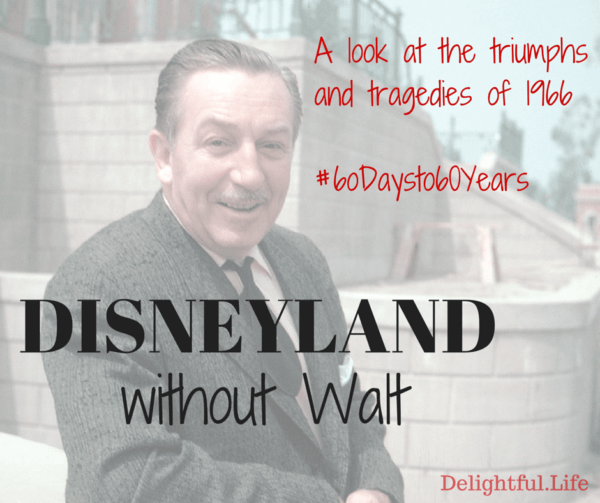 The year I have chosen to remember is significant in a way perhaps much different than other years in the 60-year history of Disneyland. In 1966 the Disney family – and the Disney world at large – lost its beloved patriarch. The New York Daily News wrote a touching piece the day after he died, sharing Walt Disney’s story and many of his triumphs. It also said,  “At the time of his death, Disney was involved in his most ambitious project to date – [Walt] Disney World, in Orlando, Florida.” Almost five decades later, we know – true to form – he was working on much more than that.

In October of 1965, the Orlando Sentinel “outed” Walt Disney and the Disney company as the entity purchasing hundreds of acres of land in Central Florida under various pseudonyms and fake corporations. The revelation made the land prices skyrocket, as predicted, but it gave Walt and Roy the opportunity to go public with their plans for “The Florida Project“. 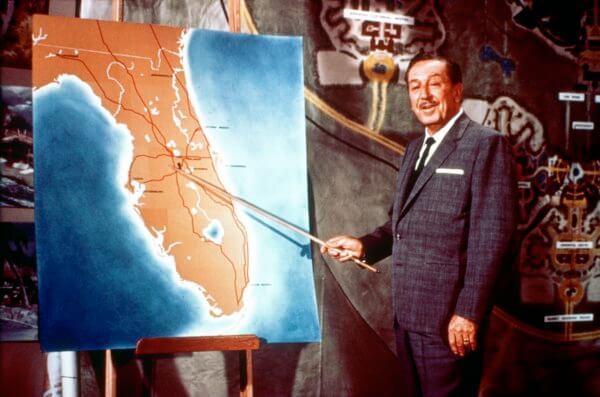 In May of 1966, “it’s a small world” came to Disneyland from the 1964 World’s Fair that had closed just months earlier. The arrival of the already-classic ride was met with great fanfare. Children from 16 different regions of the world plus 800 members of the press and the launch of 100,000 balloons celebrated its arrival. Shortly thereafter, Primeval World opened followed by a brand new land, New Orleans Square. It was a busy, thriving time for Disney theme parks and other projects across the US. It seemed nothing was slowing down Walt and his company, but in a very short time things would change. 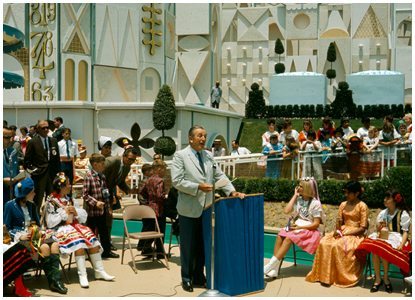 Dick Van Dyke recalls staying with Walt during the filming of Lt. Robinson Crusoe, U.S.N. – how Walt would stay up all night with a horrible cough, sweating and trying to calm a (literal :)) pain in his neck over and over, each night. By day, Van Dyke said, he would appear as enthusiastic and charming as ever.

In November of 1966, Walt went to the hospital to have some tests run on “the old polo injury [that had been bothering him for months].” He wouldn’t be released before having exploratory surgery, and more than half of his right lung removed when surgeons found lung cancer and an abscess. After his release Walt would go on to check in on a variety of projects, but by this point it was clear something was terribly wrong. When he left after visiting a movie set, the cast and crew had to cancel the rest of the day’s work because they were too upset by his sickly appearance. Imagineer Marc Davis called his wife Alice immediately after Walt left his office to discuss the progress of the Mineral King ski resort project, telling her he was certain Walt was dying.

Walt and his wife Lillian decided to take a trip to Palm Springs in hopes of a bit of recovery and relaxation. The trip would be cut short though, when Walt collapsed and was taken back to St. Joseph’s Hospital in Burbank, California. From his hospital bed on December 14, 1966, he discussed more plans for the Florida Project with Roy. The next morning, he had passed away.

It took just hours for the news of Walt’s death to spread. Imagineer and now Disney Legend Tony Baxter heard on the way to work and was in disbelief, until he arrived on the lot and saw them lowering the flag. 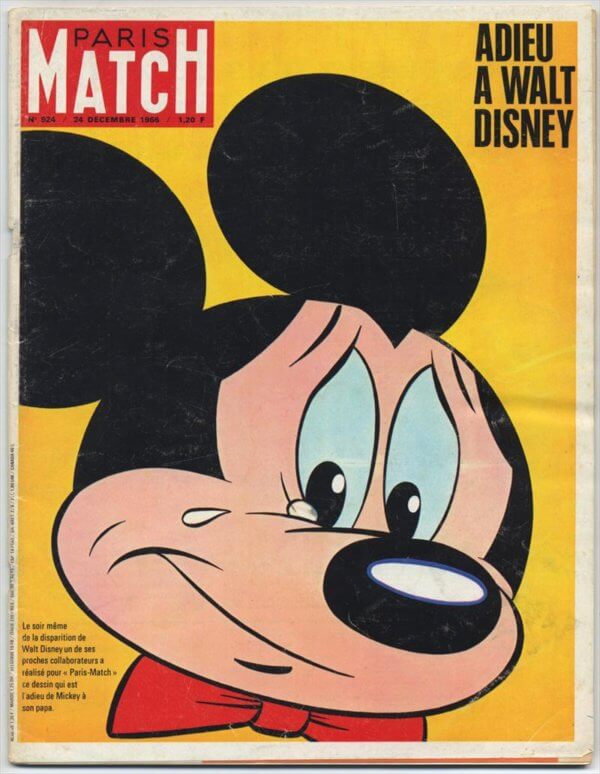 It has been said that “not a postcard or mailer was sent from Disneyland that Walt didn’t know about.” As directly involved as he had been – staying at the park for days at a time in his apartment above the fire station on Main Street, USA – I’m sure many people were left to wonder what would become of Disneyland? Of the Walt Disney movies that had changed the course of motion pictures forever? His “Florida project” and “city of tomorrow”? 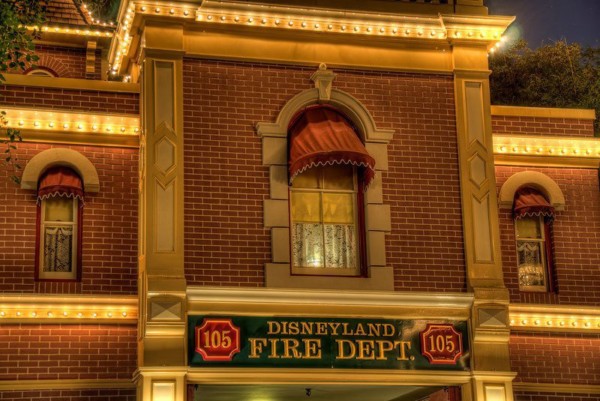 On the day of his death, there was of course discussion of closing the park in his honor. Just a few years earlier it had been closed upon hearing news of the assassination of John F Kennedy, so many assumed it would close if Walt had died. Dick Nunis, who would go on to be the chair of Disney Attractions, said best why it ultimately remained open that day: “Walt was always about doing right by the people. People have driven here to come to the park, and they are going to have a park to enjoy.” Roy Disney, who had been set to retire, decided instead to finish the Walt Disney World project.

In 2015, we know that Roy would go on to name Walt Disney World in honor of his little brother, and that Epcot would turn out vastly different from what Walt originally planned. But what about those that were in the thick of it when they found out he would no longer be overseeing the company and its projects?

During an icebreaker once, we were asked what we would do if we could experience any one thing with any person, dead or alive. My husband quickly said he would love to visit Disneyland and walk around the park with Walt. As difficult as the time must have been just after his death, I think his presence in the park from its inception is exactly why cast members were able to go on and continue his legacy. I think it’s why even still, Walt Disney World veterans can easily fall in love with the original Magic Kingdom because it’s so very clear that Walt had poured into it until the very end. 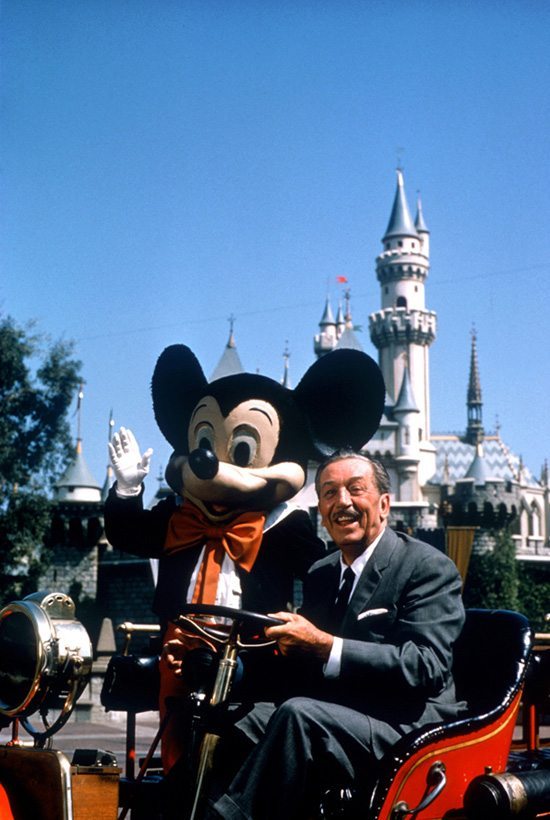 47shares
Previous Post: « Your life is a gift. (Even the ugly parts of it.) | TDL 030
Next Post: Griffith Park, Los Angeles: Visiting the place Walt’s Disneyland Dream Began »