If you can get to Walt Disney World easily – and perhaps you already go frequently – do you really need to visit Disneyland?

I’ll admit it – when my husband, kids and I went to California for our first Disneyland trip, it was very much to “check it off of our list.”  We knew all the stats — four parks versus two, dozens of hotels versus three, Disney Bubble versus no Disney Bubble (perhaps the most important factor).  We were warned that Sleeping Beauty Castle would, in fact, look like “a cake topper” to those of used to the majestic Cinderella Castle.

We didn’t care – we knew we had to get to the place Walt had dreamt up.  Even if, as naysayers claim, “he wasn’t even really satisfied with it (thereby building the Florida Park we’d come to know as Walt Disney World)”, it was his vision that changed the entertainment world as we know it today. He walked there each day. He had an apartment there.  Most (though of course not all) things there were “the original”, and therefore absolutely worth seeing.

Worth seeing once, we assumed.

We spent 4 days in the parks (on an 8 day Southern California trip) and it simply wasn’t enough. We wanted to get back as often as possible, and are sad that distance and money turn “as often as possible” into “not very often”. Recently though, I was a guest again on the Disney Nerds Podcast, where we talked a little about visiting Disneyland. It made me long to go back, and started the conversation once again – why would WDW veterans, and especially those who can get there easily (or AP holders, etc) make the journey to California? I’ll give you a handful of reasons, though I assure you I could talk your ear off about them over a Pineapple Soft Serve at Menchie’s if you’re up for it. 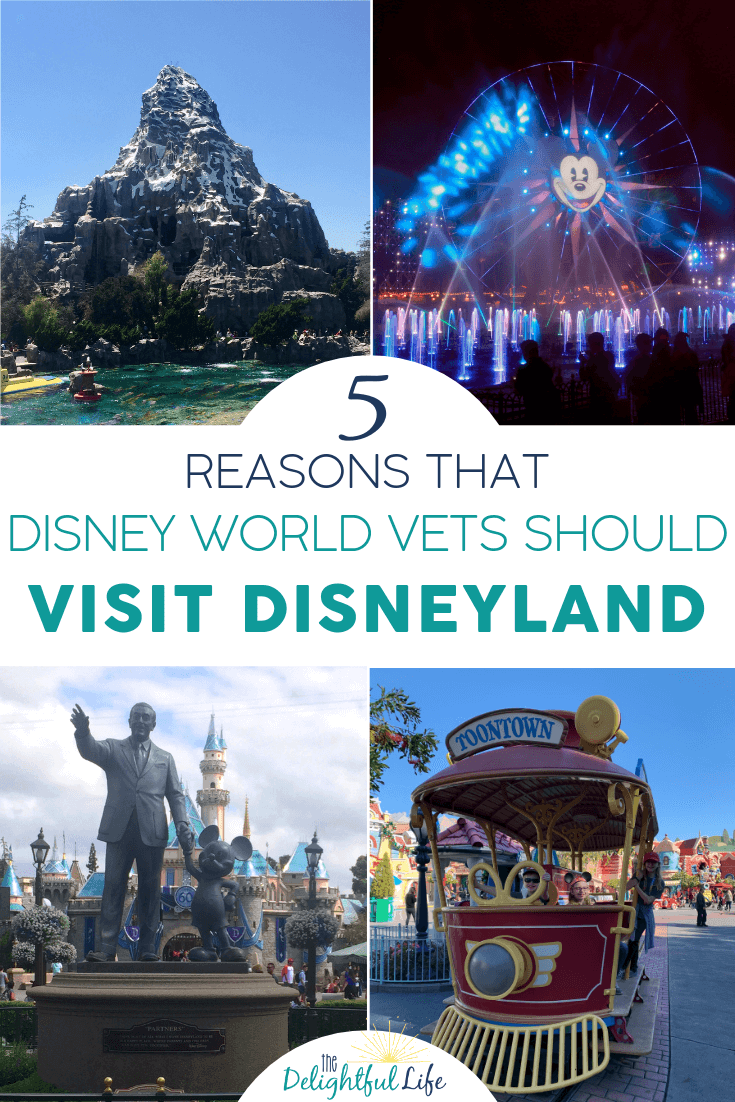 If you’re a fan of the Disney company – and I imagine you are, if you’re reading this – then I can pretty much assume you might be a fan of Disney the man. There is just something magical about walking into Disneyland park – hearing his opening day Welcome Speech in your head, seeing the flame burning in his old firehouse apartment, and seeing Sleeping Beauty Castle (even with its limited size) for the first time that can choke a Disney fan up. Add to this attractions like “The Disneyland Story” and “Great Moments with Mr. Lincoln”, and you’ll have so much history to take in if it interests you that you’d certainly need more days! We even took day trips to Los Angeles and rode on the famed carousel where Walt’s daughters rode as he dreamt of a place families could play together… but those are stories for another day.

Were you a fan of Mr. Toad’s Wild Ride? It’s still there. Love the Fantasyland dark rides? They have at least half a dozen more we have never experienced in Florida. In fact, the number of attractions in Disneyland’s two parks very much rivals that of Walt Disney World’s four parks. Beyond numbers though, it was so great to play in Toontown again (a much larger, immersive version I might add), to spin in open-air teacups, to experience the nostalgia of Storybook Land… as familiar as some parts of each park feel, it really is an entirely different experience. Even the rides that look the same from the outside (Splash Mountain, Buzz Lightyear Space Ranger Spin/Astro Blasters) are often vastly different, which made for some very fun comparisons and discussions.

If you have ever so much as seen the original Cars movie – and moreso if you have a fan of the movie in your household, the trip might be worth it just to set foot in Radiator Springs. I remember listening to podcast episodes where they discussed the landscape and architecture of the mountains and buildings and how remarkable they all were, but nothing could prepare me for actually being there. It is the most breath-taking, realistic transformation I’ve ever seen. Add to that the thrilling adventure that is Radiator Springs Racers, the other super-fun attractions, snacks at the Cozy Cone and a traffic light that really does blink a little slower every third time, and this land by itself becomes a must-see!

4. California Adventure and World of Color.

I know, I know. There’s a lot of bad-mouthing of Disneyland’s second gate. Having only been after a massive refurbishment, I imagine I would have understood more prior to the addition of all the new lands and reimagining of the original areas. In its current incarnation though, the whole park was really a lovely surprise for this midwestern family. If you’re from Southern California, maybe it’s not exciting. The atmosphere though, combined with Disney details and service, brought us back again and again on our trip. The excitement of the wharf and the boardwalk, the majestic mountains, the splendor of Old Hollywood… I for one think they have done an excellent job of representing the state to those of us visiting. 🙂

Perhaps food items might not be worth traveling across the country… but then again, have you ever had a Disneyland corn dog? It’s certainly not the excuse of a corn dog they serve in the Florida parks (aside from what is now available at the Fantasy Fare food truck in Downtown Disney. About time, WDW. About time.) It’s glorious – nostalgia and flavor and just the right amount of grease all wrapped in gigantic corn dog breading. Beyond that, there are literally dozens of snacks and food options available that simply aren’t in any of the Florida parks. It’s honestly a whole series of posts, just as you can imagine if you’ve eaten around Walt Disney World.

I could have listed so many more things that stood out – Mickey’s Soundsational Parade, Musical Chairs with Alice and the Mad Hatter (hands down one of our best memories), the Animation Building, Marvel character meet and greets… I could go on and on. You’ll just have to take my word for it, though, that it’s worth a trip to the other coast. It may be like comparing apples to oranges, sure… but I for one enjoy both. And, hello? You’re relatively close to the Pacific Ocean.  And In-n-Out burger.

Must refrain from booking plane tickets……