Check out the Kaufman Kids' new YouTube channel!
You are here: Home / Family Entertainment / Why You Should Run to the Theaters to See #Incdredibles2 – and Why Maybe You Shouldn’t
2shares

This summer’s blockbuster hit from Pixar, #Incredibles2, is now officially in theaters. Have you been waiting 14 years for the sequel to The Incredibles? The first movie isn’t even among my top 5 Pixar films, but I was still excited to catch up with Mr. Incredible, Elastigirl, Violet, Dash, Jack Jack, and Frozone! Thanks to Walt Disney & Pixar Studios for graciously treating our family to the movie this week. Find out what we thought! 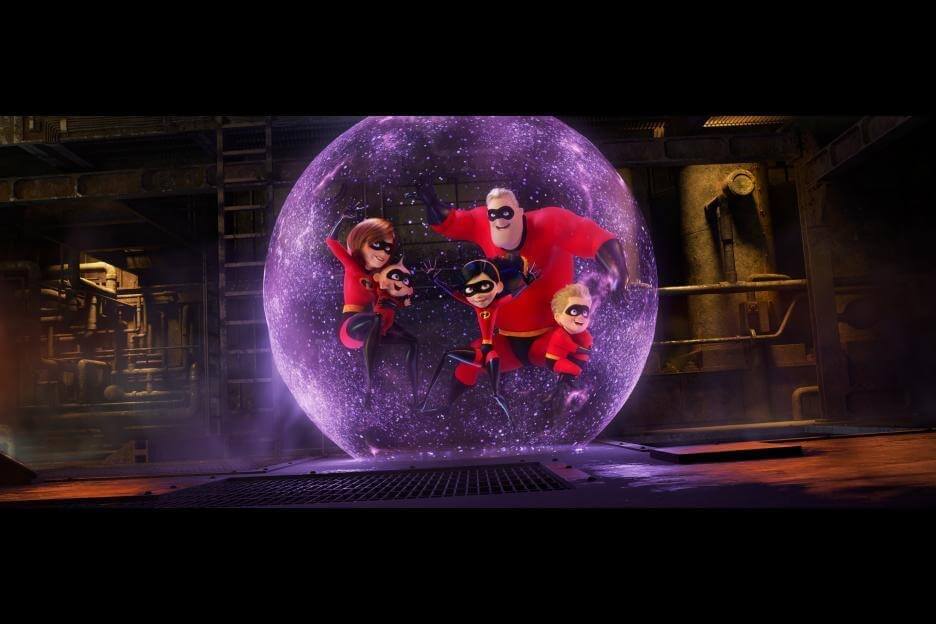 Fans have been waiting 14 years for a sequel to The Incredibles. Wait no more! Incredibles 2 is in theaters, and it’s so, so good. Photo via Pixar Animation Studios

I’ll be honest. Even with PG movies from companies like Disney, I’m always the mom who is reading extensive parent reviews about what to expect. We’re pretty conservative when it comes to what our kiddos watch, so I like to know in advance when what other people think is right for their kids may not be right for ours.

I didn’t even stop for a second to think about whether Incredibles2 would be appropriate for families because, well, it’s the sequel to The Incredibles. In retrospect, I guess I just assumed it would be 100% benign. It turns out, it’s actually not…

Our Overall Thoughts About #Incredibles2 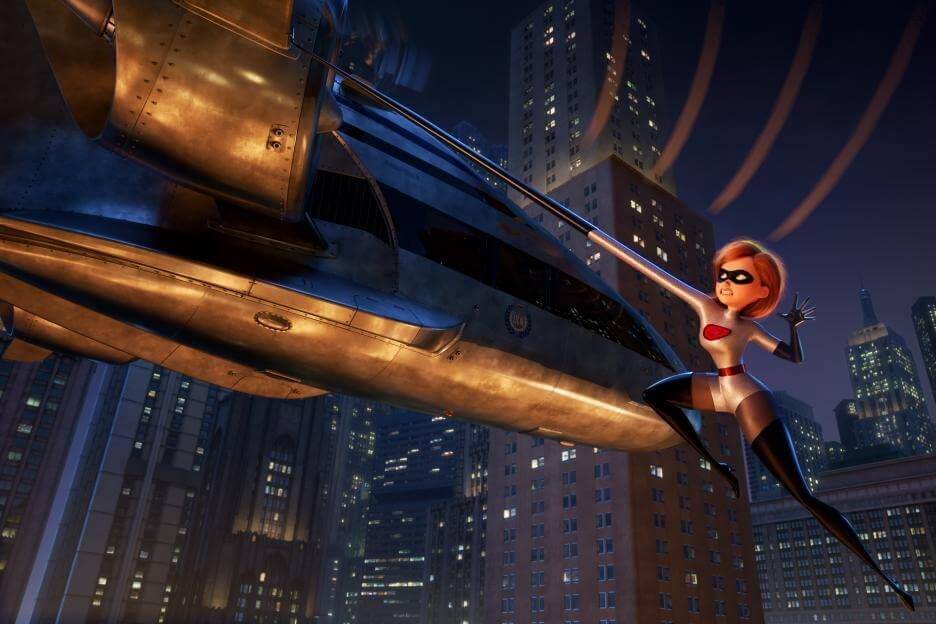 It’s Helen’s turn to go back to superhero work in Incredibles 2! Photo via Pixar Animation Studios

We watched a screening of the latest Pixar film a handful of days before it came out. Our theater was fairly full, including many families. The laughter in the room throughout the entire movie was contagious. I even had a stranger stop me and tell me that my son’s reactions to the movie were “the best thing about the whole experience”. I was relieved when she finished her thought, because I have to admit – my kids were laughing ridiculously loud. Judging by the number of times I couldn’t contain myself and laughed out loud though, they truly just couldn’t help it. It’s a really, really funny movie.

That said, my 6-year-old still worries at night that he’s going to have nightmares. He left the theater saying he didn’t really love the movie (despite thoroughly, outwardly enjoying it for 99% of the time we were watching) – though I think that will change now that he knows what to expect.

From my perspective, Incredibles 2 may be one of the best movies that Pixar has ever produced. I liked it immensely more than the first, and can’t wait to see it again. The writing for Bob and Helen Parr (Mr. and Mrs. Incredible/Elastigirl) is flawless, and the entire family captures the most endearing, chaotic, lovely dynamic I think I have ever seen in an animated movie. Jack Jack is a relentless source of comedy from start to finish. As I told a few friends after seeing the movie, it’s the perfect balance of clever humor and physical comedy – which means it’s great for the entire family.

So why might some people wait to see it….?

A Parent’s Perspective: #Incredibles2 is not as Family-Friendly as You Might Think 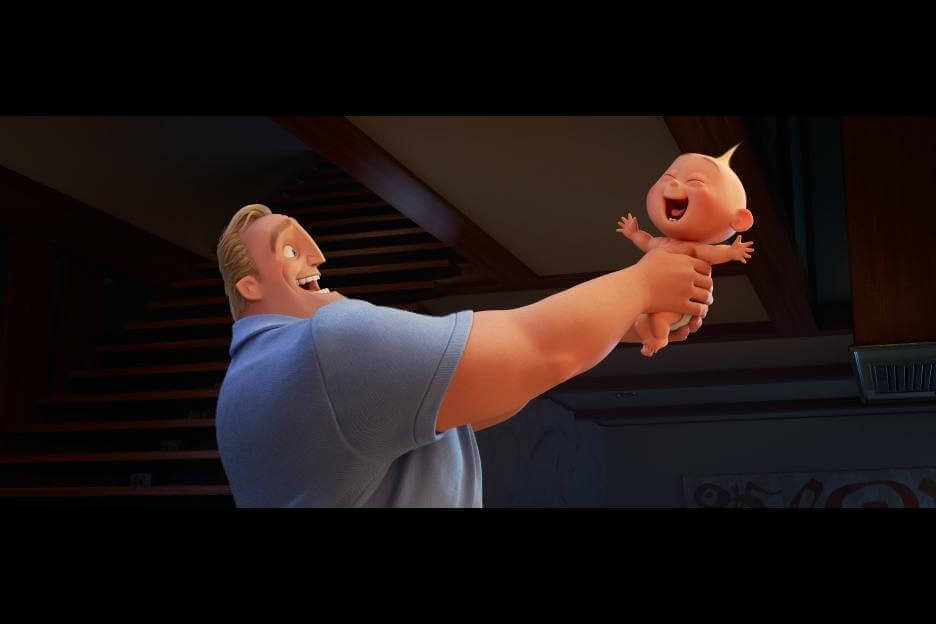 Is #Incredibles2 Kid-Friendly? Yes, and no. Find out what to watch for when you take your kiddos! Photo via Pixar Animation Studios

As I mentioned, my son is still a little nervous about part of the movie. One scene in particular is set up for a pretty big jump scare, and had all three of my kids burying themselves in our arms. The “payoff” was real, with each of us jumping (and a few people screaming in the theater). The good news is, it’s really obvious that it’s coming. (Is that good news, when anticipation and build up are among the most effective mechanisms for scary movies? Maybe not…) The bad news is that it led immediately into a somewhat intense fight scene. Now, I realize this is an animated movie about superhero that can stretch and shoot lasers out of their eyes – so it’s not “intense” in the same way as, say, Black Panther. But it’s not all fluffy unicorns and sparkly rainbows. Our friends legitimately look like they’re in danger at times.

Yep – I have to include a bit of a language disclaimer for an animated Pixar sequel. Kind of a bummer. This isn’t a movie full of gratuitous cursing or even loaded with insults or name-calling; there are far worse offenders – even among kids movies that we really do love. That said, it felt a couple of times like the production team wanted to make it feel more “grown up”, and it felt pretty unnecessary. My kids were definitely all caught off guard, even if the offensive language wasn’t enough to keep us from going again or owning it as soon as it comes out for home viewing.

The biggest moments that stood out, just because I know that everyone is bugged by differing “levels” of language use, are a use of the word “hell” and of the phrase “I’ll be damned”. Especially the latter felt super out of place, but it’s nothing I would skip the movie over.

A Specific Warning for Sensitive Kids 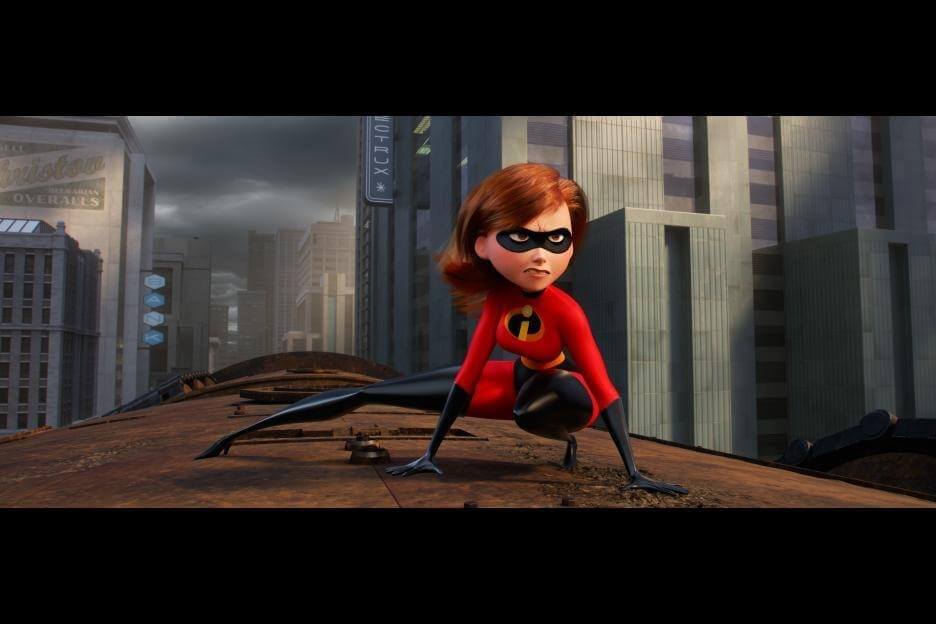 Fourteen years of animation advancements make this an even more enjoyable movie to watch. Elastigirl and Jack Jack definitely benefitted from the technological advancements! Photo via Pixar Animation Studios

My son was once the world’s biggest 4-year-old Muppets fan, and it was the cutest thing ever. He was obsessed, but one day he woke up and it was like a switch flipped with regards to the movie Muppets Most Wanted. A little digging uncovered his biggest problem with the movie – which will make perfect sense if you’ve seen it, and none if you haven’t. I’ll do my best to bring it back around…

When public enemy #1 Constantine tricks people into thinking he’s Kermit (so, most of the movie…), my son was super uncomfortable. He absolutely hated seeing everyone’s favorite frog being mean to his “friends” – especially to see him manipulating them and deceiving them. Even though he knew it wasn’t really Kermit, he couldn’t handle it.

This is the same kid who will watch movies where heroes battle dragons, but when said hero starts to get into an argument with friends and family, will leave the room because it’s “scary”.

If you have a kiddo with a similar temperament – who is especially bothered by characters who aren’t acting the way they are “supposed to”, or by people being tricked or seemingly betrayed by role-reversal, or by not quite being sure who to trust, etc, then this movie may be a little hard for them. This may be especially true in the theaters, when they can’t run into another room until the intensity subsides.

Should You See Incredibles 2 in Theaters? 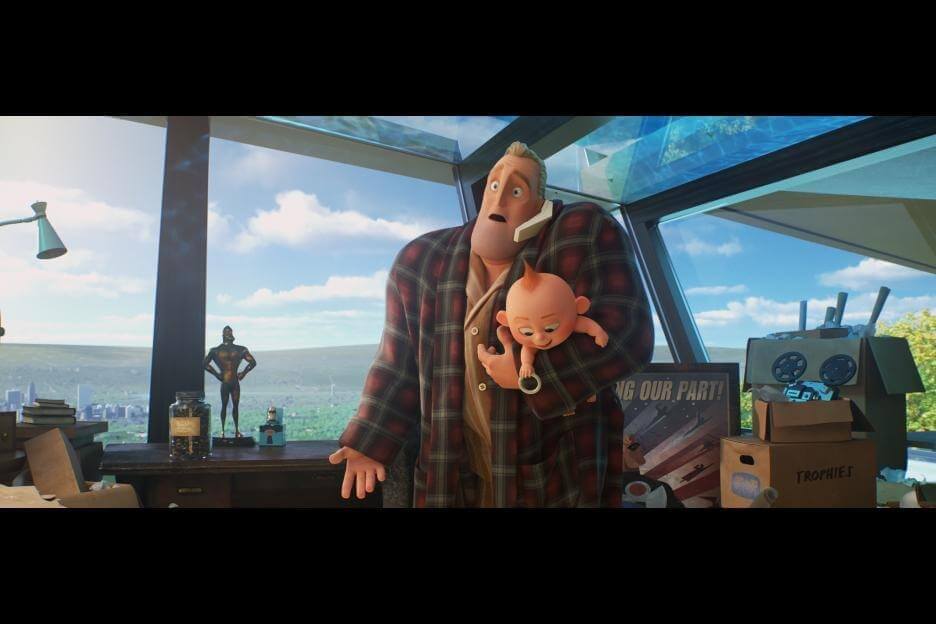 As much as Elastigirl really shines in the spotlight… Bob Parr shines at home. Eventually. Some of my favorite scenes in Incredibles 2 are about the home – not the action scenes. Photo via Pixar Animation Studios

I think for everyone I know – and that includes families and grown ups and kids who can handle (or prefer) varying degrees of intensity, language, or story – this is a movie that should be seen as soon as you get the chance. It’s hilarious and charming. It’s spot on with regards to family dynamics and parenting struggles. The character development – especially of Helen, Bob, and Violet – is so lovely. Edna and Frozone get even more screen time, and will make you love them even more.

I often worry about movie sequels, but Incredibles 2 is more than sufficient. In fact, I think for many people, it will surpass the original. It definitely has for me, and it’s one I will be more than happy to watch again and again, for years to come! 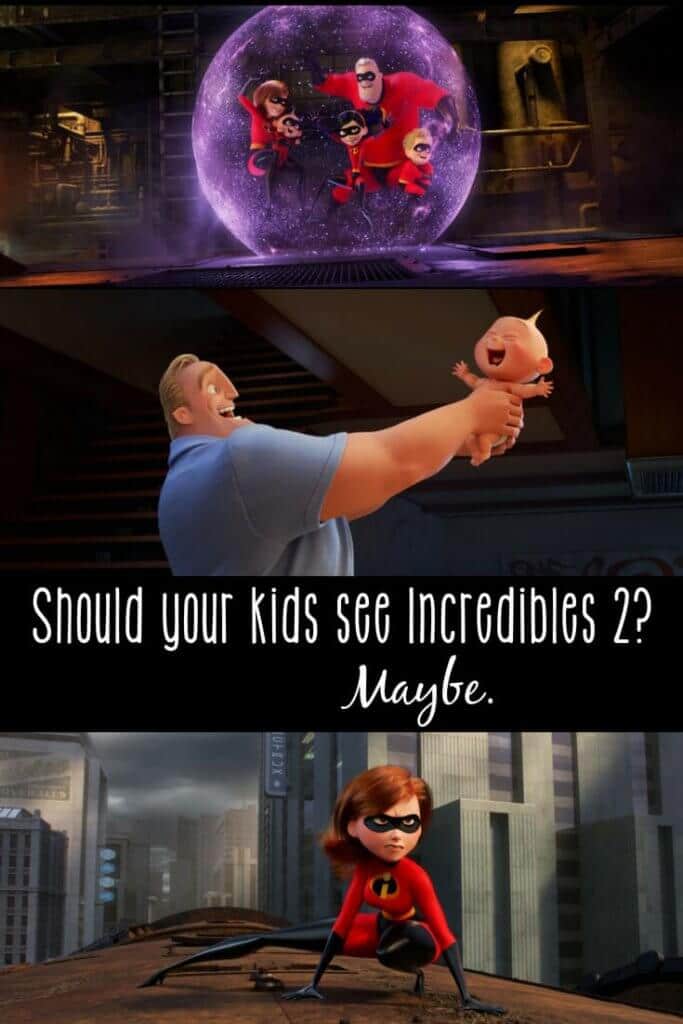