Check out the Kaufman Kids' new YouTube channel!
You are here: Home / Travel / Which Barcelona Beach is Best for Families?
116shares

After our Transatlantic Cruise earlier this year, we spent a few days in Barcelona, Spain. We knew that we wanted to visit a beach (since they’re so easily accessible from the city!), but we didn’t know exactly which was the best Barcelona beach for families, and how we should get to the beach once we decided. Now that we’ve gone, I’ve got what we think are the best Barcelona beaches for a kid-friendly visit. 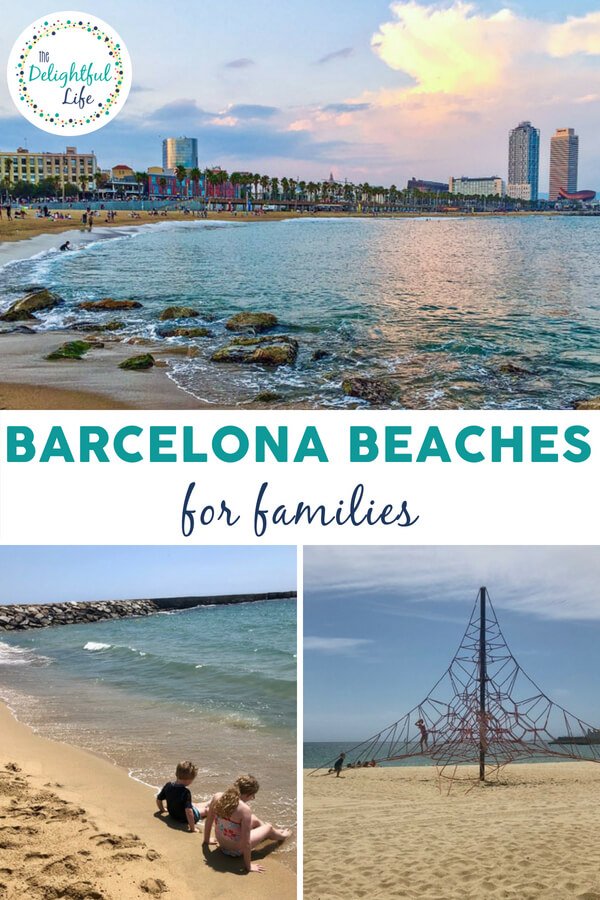 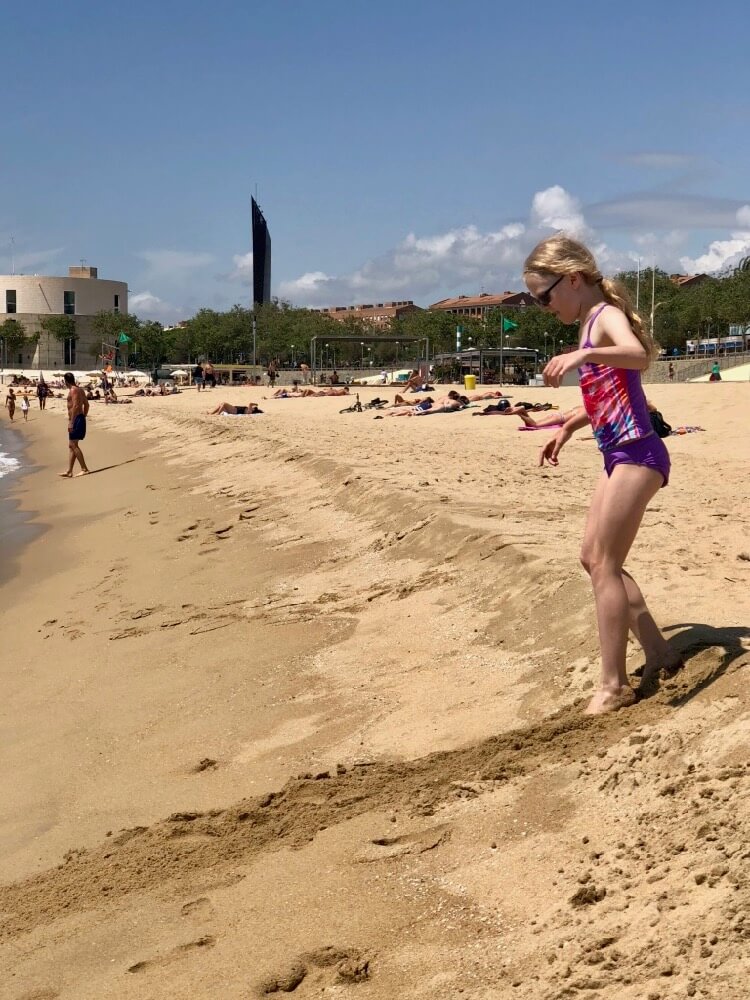 One of the most surprising things we found out during our visit, was that most of Barcelona’s beaches were actually man made – and quite new! When the 1992 Olympic Games were held in Barcelona, there was a major urban redevelopment project that included creating lots of beach front locations — which required lots of beaches.

The area along the Mediterranean that is now home to some of the most popular city beaches in the world, was previously entirely industrial. Port Olímpic, a large marina, and 5 of the 7 city beaches were all created for the Olympics.

Barceloneta is the closest beach to the city. You’ll stumble on it just about as soon as you reach the Mediterranean! It’s a nice, free beach, and a very popular option for families. If you don’t want to walk far, this is a great option. It can get quite crowded though – so if you’re up for a short stroll, you might find more desirable options just a bit further away.

That said, because it is centrally located and popular with tourists, you’ll find lots of dining options if you need a meal or snack before or after your day on the beach. It’s also perhaps the most recognizable Barcelona beach, thanks to the giant sail-shaped W hotel. 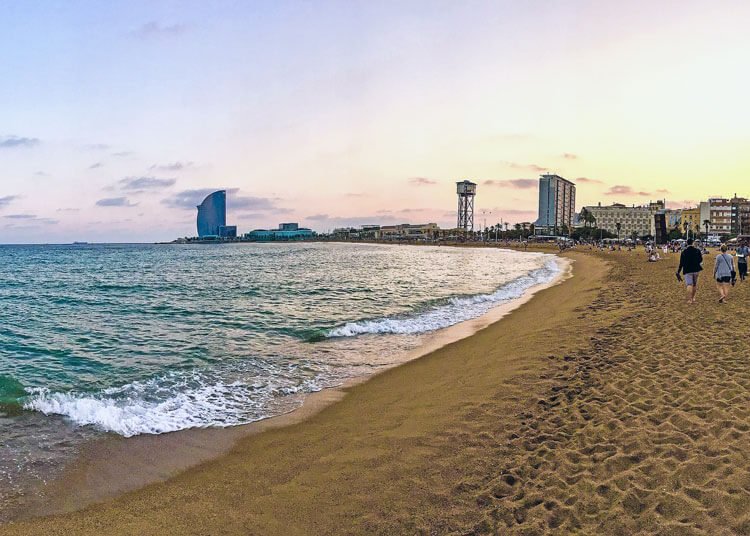 Sant Sebastia is similar in feel to Barceloneta. It is very popular, but as one of the longest beaches in Barcelona, it isn’t terribly crowded – at least outside of extreme peak season.

Sant Sebastia offers play areas, volleyball, lots of dining, and some public changing facilities, so it’s a great choice for families visiting Barcelona. Both Barceloneta and Sant Sebastia are never lacking in entertainment, either. So it depends on what you’re looking for from your beach getaway; what some beaches lack in seclusion and space, they make up for in people-watching and bustling excitement. 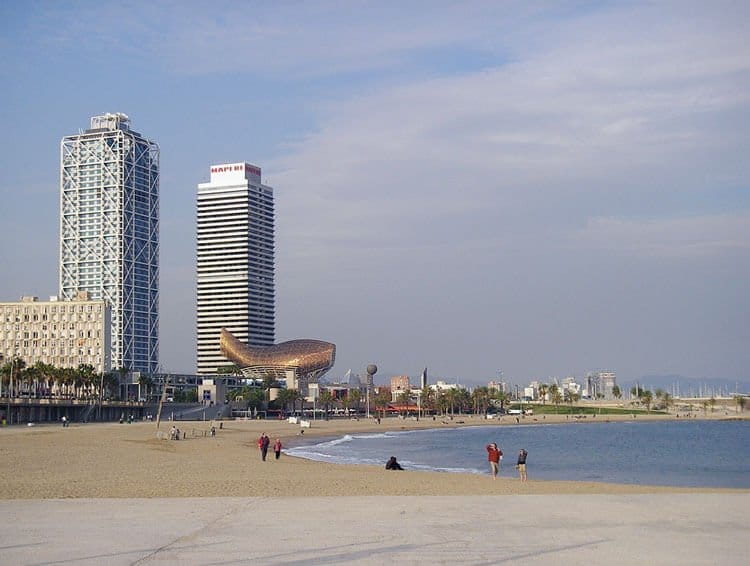 Bogatell is a neighborhood beach a little way from the city. We did not make it here, but have heard it is a fantastic beach to visit if you want a more secluded, quiet place – with far fewer tourists – still relatively close to the city. It’s about a mile and a half away from Barceloneta, so you can definitely walk from the end of La Rambla – or take convenient public transportation to the Poble Nou neighborhood.

The family that suggested Bogatell to us raved about the surrounding neighborhood. If you decide to go to Bogatell Beach, you’ll have plenty of charming little shops and restaurants to choose from as well.

The beach that was not suggested as often, but was raved about when mentioned, is Ocata. It definitely requires a longer drive (or a half hour train ride), but apparently feels much more like a private beach resort than a public, city beach.

We can’t speak from experience, but have heard repeatedly that Ocata is the best place to spread out and lounge or play on the beach if you want to spend the whole day away from crowds.

Castelldefels is the beach most often recommended by locals. It’s another that requires a train ride out of the city, but if you’re looking for water sports and a great swimming location, it’s supposed to be top-notch – and still easily accessible.

Our Top Choice for a Family-Friendly Beach in Barcelona: Nova Icaria

We only had a couple of days in Barcelona, so we knew we probably wouldn’t make it to a somewhat far neighborhood and beaches like Ocata or Castelldefels. We aren’t huge fans of overcrowded, touristy beaches at home though, so we were a little concerned about just stopping at the end of La Rambla and hitting Barceloneta.

The happy medium for us was Nova Icaria. It was just a short walk from La Rambla, and was still near enough to restaurants, etc that we were easily able to find lunch. If we had more adventurous seafood eaters, we could’ve chosen from a number of smaller restaurants right on the beach; even “regular restaurants”, as my kids looked for, were very convenient. 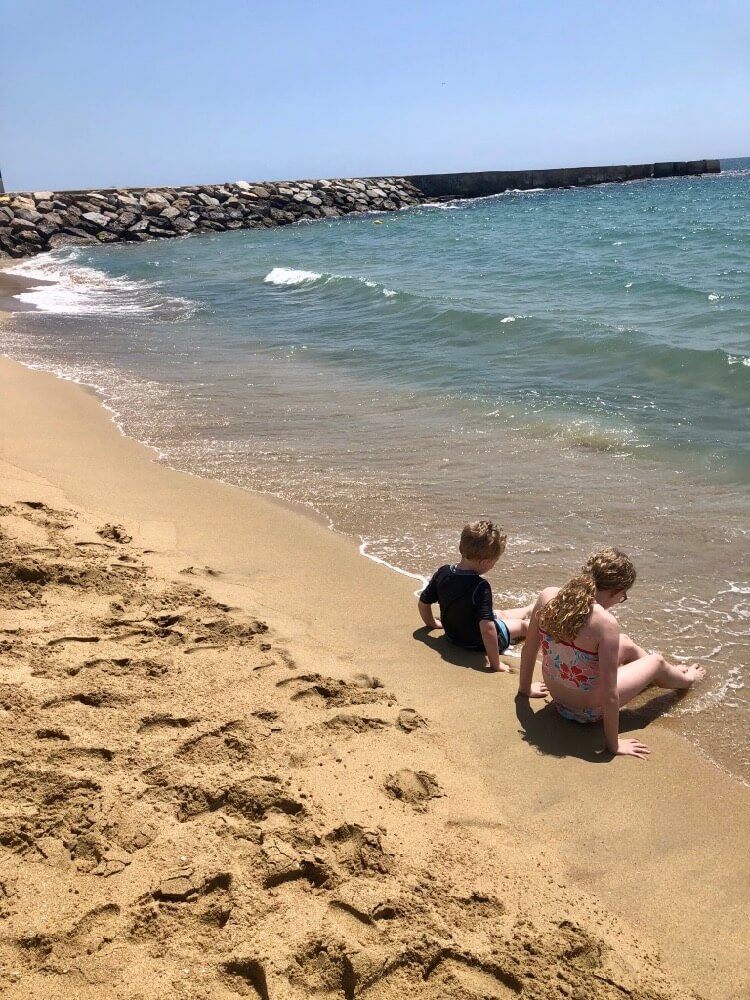 There is even a game area. We saw volleyball courts, ping pong tables, and a playground, without really even looking. 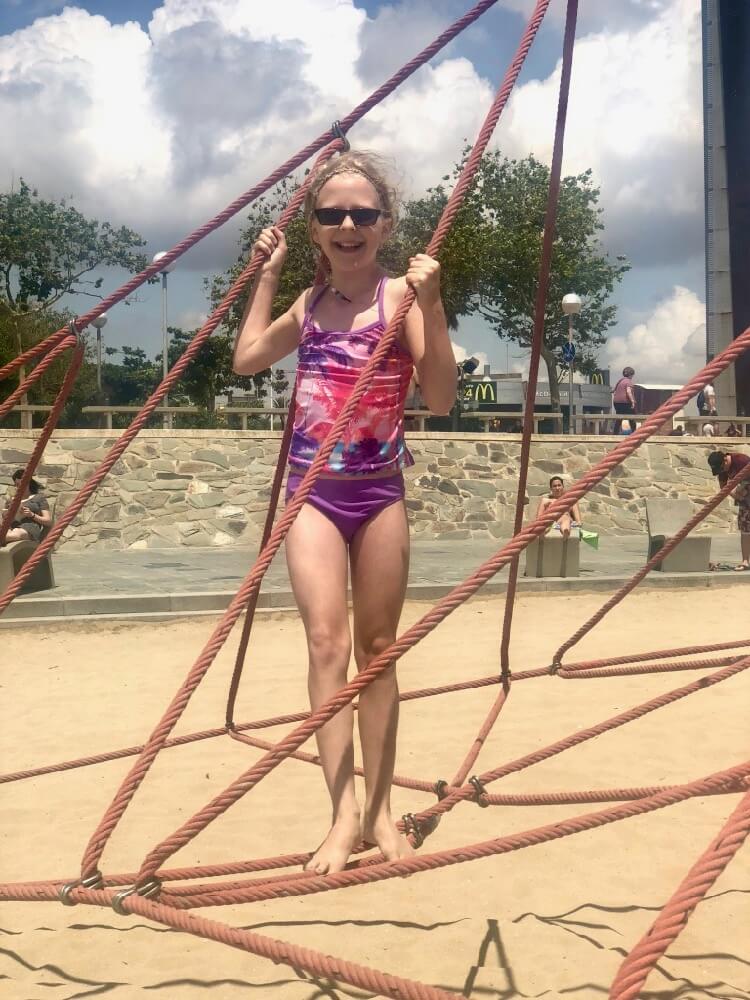 Nova Icaria has a playground and other great amenities for families.

Nova Icaria also wheelchair accessible, which is a rarity for a public beach.

Are Barcelona Beaches Worth Visiting?

I have to say, the beaches in Barcelona – much like beaches in any big city – are not the best beaches we’ve visited. Far from it, as you might expect. 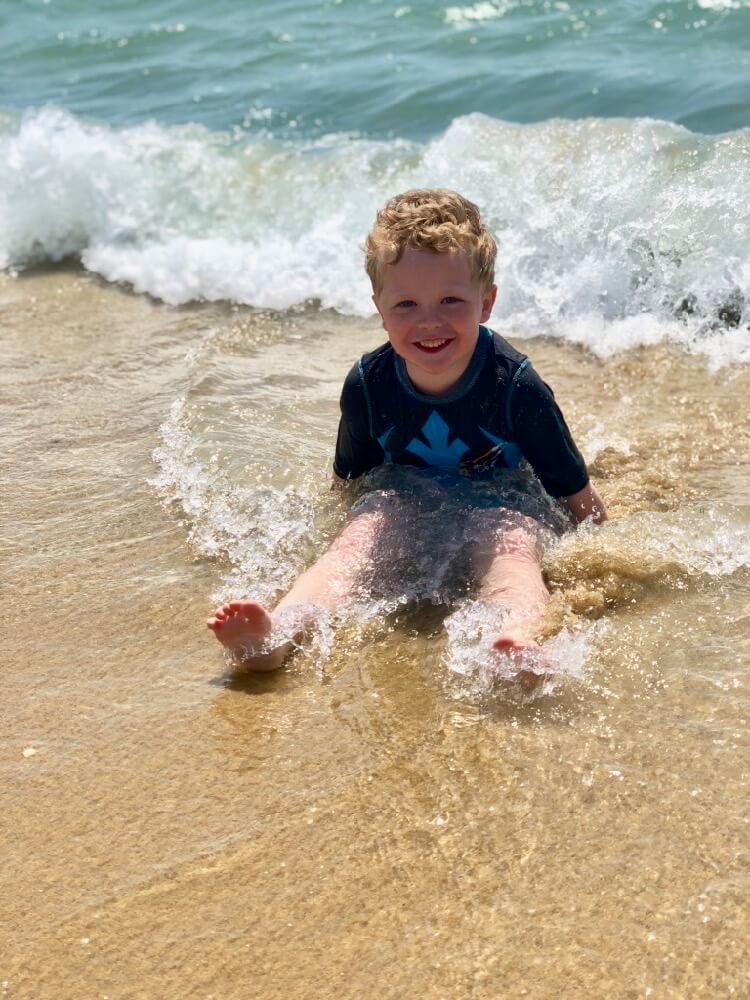 Beaches just outside the Barcelona make for a fun half-day excursion from the bustling city.

That said, we were very impressed at how clean and convenient they were for being truly just outside the city center. If you want to take a beach vacation, you’re probably better off going elsewhere. But if you’re visiting Spain and enjoying a big city-centric European vacation, I think that any number of beaches in Barcelona are great family destinations for a day trip or half-day excursion. We still talk about how cool it was to walk on one of the most bustling, popular streets in Western Europe and to essentially just “end up at” the beach.

Keep in mind, many beaches in Barcelona (and Europe, as a whole) are considered topless beaches. While we were sort of under the impression that would mean everyone was walking around with, well, everything on display for all to see… the reality was far different. On our two-week cruise and subsequent days in Barcelona, we spent time on a number of different beaches – including a private club on Ibiza. I can count on one hand the number of topless sunbathers we saw the entire trip, and they were always off in a somewhat secluded area. Your mileage may vary, of course, especially if you’re visiting in July and August.

116shares
Previous Post: « Where to find Dole Whips outside of Disney Parks
Next Post: The Truth about the Baby Shark Song »