Check out the Kaufman Kids' new YouTube channel!
You are here: Home / Inspiration / I am a runner.
28shares 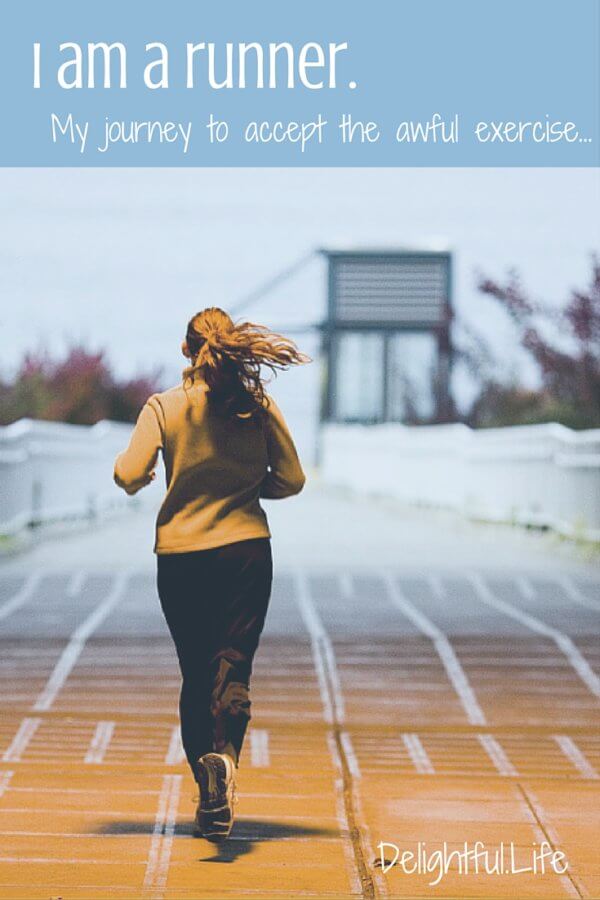 So… I’ve sat here for a few minutes unable to start this entry because I keep wanting to go back and change that title.  You see, I have forever been adamant that I am decidedly not a runner.  I quit track in school after one practice because apparently, before they let you just sprint down and do a few hurdles, you also have to run in circles around the track with your teammates.  A lot.  No thank you.

One quiet night in 2005, in a hotel room while my husband (a runner) was on an interview, I was trying to come up with some master plan to get him to go back to Disney World with me.  This is hilarious now since we go there every opportunity we get – and he now admits it wouldn’t have required any scheming at all.  Why didn’t he say so then?!  That night though, I told him I’d run a half marathon with him if it were there.  Plans were made for January 2007, money was spent – there was no turning back.  From that hotel room, I was inspired.  I read stories of people who made drastic life changes from being unable to walk to the mailbox without getting winded to completing the same distance.  Well, I thought, I’m way skinnier than them.  I know very well now that size means jack when it comes to endurance, but it’s the way I had always measured my health and my success.  This was going to be great, I thought.  From that hotel room.

The first mile I ran in that year-long training season (if you aren’t a runner, even a year doesn’t seem like enough time to run THIRTEEN.%*[email protected]), I thought I was going to die.  No, I mean literally.  My heart was pounding out of my chest so hard I could both hear and see it.  My lungs were so desperate for air – and for my albuterol – that I feared I’d never get any oxygen back in them and would, by default, take my last (non-)breath right there in my driveway.

But the days passed.  I’d run some, motivated only by the fact that 1) I’d spent the money and 2) other people were succeeding so I had to, too.  Then it was as if one day I woke up and found myself finishing 5 miles… 9 miles… 13 miles.  We completed the half on schedule with a time that is absolutely not worth sharing – but I had done it!  The girl who was ready to quit short of her first mile since junior high had just finished a 13.1 mile race.  I could do anything!

Except ever run again.  I swore I’d done it once and, being not-a-runner, would never even entertain the thought again. Kyle?  He was ready for more.  The supportive wife I am, I quoted him all sorts of science and medicine that proved humans were absolutely not made for 26.2 miles.  It’s true, and I still stand by it!  It’s asinine, and people who sign up for those lengths (and more!) are crazy.

This year, we signed up for a full marathon.  I know, I know…

But see, I’ve always known I was wired to be a runner.  I live for personal goals and smashing personal records.  I kind of hate team sports, depending on whether or not I like everyone on my team.  I can make the world’s greatest playlist for motivation and speed, and love the idea of running.  But I’m not a runner; it seems somewhere I lost the physical part that goes with that wiring.  “It’s not that I don’t like exercise, it’s that running is boring,” I’d tell anyone who asked.  “Running takes too long and doesn’t entertain me.”  “Running hurts my knee (patellar fracture during the half training? Tough Jennifer, finish. You signed up.  You see, I’m wired for this, to a fault!).”  “Running takes hours and I end up back in the same place I started, having accomplished nothing but getting tired and sweaty.”  “There is no such thing as a runner’s high.”

This past Thanksgiving, I came home and told my husband I had signed us up for a 5K, for absolutely no reason.  A few days before, I decided I should probably run for the first time in over five years.  I took to the track at the gym and cranked out 3 miles.  It was boring, but what?!  I weighed 30 pounds more than when I ran my first mile as an adult (and had not run two steps since that ’07 race), but was able to finish 3 miles in about 30 minutes.  I learned very quickly that the inadvertent cross-training I had done by taking up spinning and interval training in the interim had done wonders for my cardiovascular health.  So we ran the Thanksgiving Day 5K (after which I promptly vomited, which I still find ridiculous).

I started looking at other races.  Running wasn’t awful.  It had the potential on occasion to be, dare I say it, exhilarating.  We planned to sign up for the half in January 2014 when Kyle said, “I think I’ll finally do the full marathon.  I’d like to do a different route, and have always wanted to do one.”  I heard part of that, and replied, “Oh my gosh, you’re right. I totally don’t want the same medal!” – so we both signed up for the full.  Insane, but if I wait until I feel like running a marathon to sign up?  It will never, ever happen.

This training season has been incredible.  I’m still only running a max of 6 miles, which freaks me out at times because it’s a far cry from 26.  But on a long car ride, all I could think about was running after sitting so long.  After big meals?  All I can think about is running.  Emotions high?  I need to run.  Feeling lazy?  I need to run.  Too distracted?  I need to run.  Don’t let me fool you – I run like 3 times a week, on good weeks.  But last week I ran in the rain, simply because it was time to run.

Honestly?  I’m not sure why I’m sharing this today.  I’d like to say, “If I can do it, anyone can!” but if you’re like me, you’ll respond to that with, “No, you don’t understand.  I’m NOT a runner.”  It can be impossible to hear inspiration from someone who can run any distance at all when you feel your first mile is unattainable.  I’ll leave that there though, because it’s still true whether you believe me or not. 🙂

Is the lesson here that if we stick with something long enough we’ll like it?  Probably not, that’s not really how life works.  Is it the idea that our bodies are wonderfully made whether we’re at our highest or lowest weight?  A little, yeah.  That’s definitely something I’m learning along the way, and am more intentionally acknowledging.

Mostly, this little (huge) thing happened this morning.  I joined a group of runners online, and said, “I am a runner.”  I feel like I haven’t yet earned the title; I feel like I’m going to struggle to actually get to 26 miles (but am determined to do so whether I run or crawl across the finish line); I feel like I’m far too out of shape, too fat.  But none of those things define me.

I am a lot of things, and this morning I’m claiming it – I am a runner.

What are you claiming today?  Is there something you’ve been afraid to call yourself because you felt you weren’t ready, weren’t good enough?  Leave a comment – let’s work through it together!