This post was originally written in 2013, and has been updated once or twice through the years. Many people have reasons they don’t celebrate Santa with their family, don’t allow their children to believe in the guy at the North Pole, etc. We have our own… but I assure you they aren’t meant to judge your family’s decision. If your celebration includes the guy in the red suit, you’ll be relieved to know he shows up at our church’s Christmas Eve Eve service – and we happily take photos with him whenever we can. 🙂 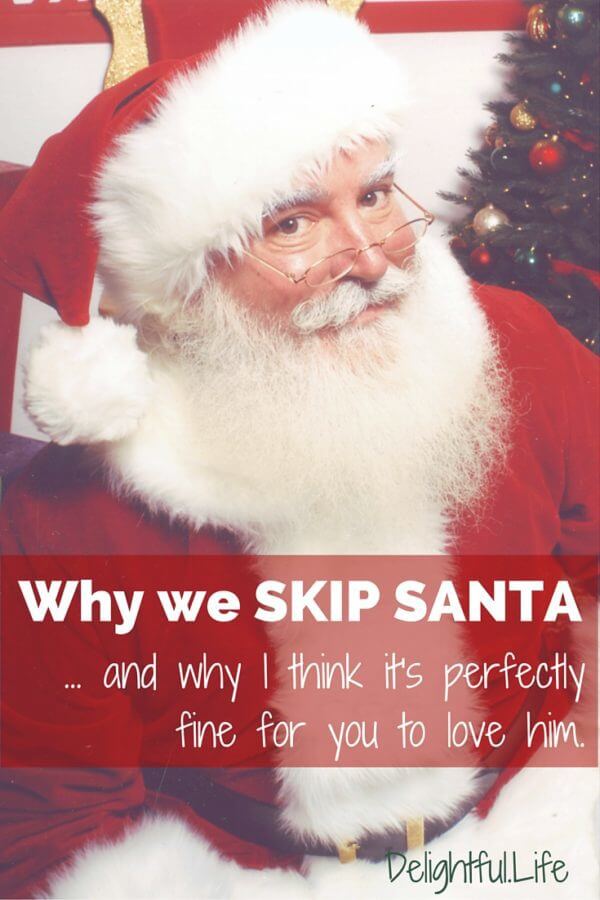 Should we teach our children to believe in Santa Claus?

Oh, the Santa Conversation.  I used to think it was one only evangelical Christians had, but with the wonders of the internet I’m learning that people all over – of all different backgrounds and beliefs – have oh-so-many opinions on the guy in the red suit.  It’s always a little awkward when people ask my 6-year-old about visits with (or from) Santa, because he’s “just a story” in our family.

So what gives?  Why do we rob our children of the joys of childhood like monster parents?

For the record, nobody I know in real life has said anything like that to us.  And for the most important record, the people on the internet who say things like that (from either end of the spectrum – they come in all kinds) need to chill out. Now that we’ve gotten that out of the way…

Common Reasons to Skip Santa – but not OUR Reasons

Some common theories as to why we’ve chosen this route, and my thoughts on each.  Take them for what they’re worth:

(“When my kid finds out Santa isn’t real they’ll never believe anything else I said {especially about God, Jesus, etc}”)

I’ve actually thought this one for a fleeting moment, especially with the similarities we assign to Santa and God.  That said, I’ve never met anyone who said they were just about to enter a relationship with the Lord of the universe but they just couldn’t get over the hurdle of the one time their parents lied to them about the Jolly Old Elf.  If that’s you, I’m really sorry. Let’s grab a cup of hot chocolate.

{Editors Note: It’s now December 2018. It’s 5 years after this was originally published, 10 years after we made this decision for our family, and 35 years that I’ve been on this earth. And this year, I actually heard just this from an atheist who had wrestled with this very idea for much of his childhood. I really would love to buy him a cup hot chocolate and, because that really does make me a little sad. I’m not sure why, but that’s probably for a different post….}

(“‘Do not lie’ is one of the Ten Commandments, for crying out loud.  I would never lie to my kids.”)

First, I want to believe you – I really do.  But did you literally not have $0.75 for that candy bar the other day?  Do you really believe your child can be anything they want to be? (Ouch. That one sucks for all of us.)   We lie to our kids all the time.  Is it right?  Probably not.  Is it a good idea to try to be the best we can rather than chucking effort out the window because it’s hard to be perfect?  I’m pretty sure that’s commanded of us if we are followers of Jesus – and not a bad idea, even if we aren’t.  Still, to fight tooth-and-nail on this topic based on “never lying”?  That seems a flimsy argument to me.

For us though, it would also be the most hypocritical choice we could make.  We are a family of Disney fanatics.  It was a sad day when my kids started asking questions about Mickey and all of his friends that we almost always caught at the exact time they were also at Disney World.  We adore all of our friends in Disney Parks and ships and will continue interacting with them and believing in them and their ridiculously cool magic as long as we live.  I have no problem with buying wholeheartedly into fantasy and make-believe.  Obviously.

(Lesser-known Eleventh Commandment: “Let us not take Christ out of Christmas.”)

This one I get… in moderation. I think our focus should absolutely be on the baby who came to change the world and give us life. I think after that comes family and tradition and serving others and quality time together. And somewhere down the line comes presents. And maybe mixed in there, if you want, is a little bit of St. Nick or Santa. Doesn’t bother me in the slightest.

I do however have a problem with people going all Westboro-lite and protesting the heck out of the letter X (especially knowing the etymological background) or wanting to karate chop people who choose to allow their kids to believe the North Pole exists just as it does in Elf (one of the best Christmas movies ever, obviously). And don’t get me started on the embarrassing outrage about the red Starbucks cups.

I do have a problem with Christmas being about entitlement and debt and a lack of self-control. I have a problem with people clinging to the belief that Christmas actually started out as a remotely Christian holiday. But to me, any of these issues are more about keeping the focus on Christ than on lambasting Santa.

4. The “Credit Where Credit is Due” Theory

This one might be self-explanatory – or maybe I’m just selfish. I love giving gifts. I am giddy when I put the final touches on something that took a lot of effort or purchase and give something that shows I was listening and thinking of someone all year long. I love watching my kids open presents that I know are perfect for them, and then watching them play with them month after month, long after Christmas passes. (My secret?  Get them what they *really* want, not what they say they want while watching YouTube)

For real though. Why should Santa get all the credit? No, seriously. We work so very hard for our families, and in addition to thoughtfulness and generosity, there is often a very real monetary sacrifice during the holiday season. I want to make my child’s day, even if a little part of Christmas does turn out to come from a store.

5. The “Breaking and Entering” Theory

So, I don’t know if it’s just a new world or what, but I’m dead serious when I say I would be freaked the heck out if I thought too long about a stranger having access to my house and roaming around my living room while we all slept. Maybe it’s because I’m a little crazy, or maybe it’s smart. I can assure you this, though, I have at least one child who would ask the very same, very fear-driven questions.

OUR Reason for Foregoing Santa at Christmastime

So if none of these are the reason we really use for celebrating Christmas without any focus on a person who brings us gifts made in his workshop by elves, why do we make the choice we do?

We miss the point ENTIRELY of the babe in the manger if we celebrate His birthday by earning gifts, being good, impressing that creepy shelf elf so he gives a good report (sorry, pro-elf parents).

I want my kids to know I love them even when they feel they didn’t earn my love. I want them to know God loves them even though they certainly can’t earn His.

So that’s that. We had a conversation with each of our children when they were old enough, about how different families celebrate – and how it’s not our place to tell other kids he’s just a character in stories. They do delight in talking about St. Nicholas, which eases my mind a bit. They know that it’s up to other mommies and daddies to tell their kids about Santa when it’s right for their family. Otherwise, they’ve never been bothered about it for one second.

Am I worried they will be? Not even a little. My memories of Santa, despite leaving cookies and milk for him each year and all the rest of the “Santa things” one must do, are limited to figuring out that his handwriting matched my mother’s. It’s just a blip in time, not something that I have any feelings about one way or another; I have no other memories that make me feel like my children are missing out on anything.

The things I do remember about my childhood Christmases are looking at lights. Singing carols. Watching movies with my family. Decorating the tree.

We do all this and more, and I think if we’re honest with ourselves the Santa Conversation is one that’s probably not worth as much of our energy as some of us give it.

But grace? Grace is something for which I need all the help I can get. I’m so glad that, for my family, it works out well to make it all the rage at Christmas.

What about you and your family?  Do you do the Santa thing?  Do you balance Santa and Jesus a different way?

288shares
Previous Post: « The Truth about the Baby Shark Song
Next Post: MARY POPPINS RETURNS IS MARY FOR A NEW GENERATION…. OR TWO »